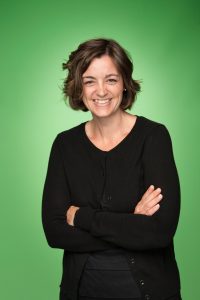 The CUNY Graduate School of Journalism is pleased to announce the appointment of a managing director and an executive committee for the News Integrity Initiative, which has been funded with $14 million to develop a more informed public and greater trust in news.

The Initiative is a project of the Tow-Knight Center for Entrepreneurial Journalism led by Jeff Jarvis, a professor at the CUNY J-School. She will work closely with Jarvis to execute the vision of the NII.

NII also announced that its executive committee will consist of Jarvis; Áine Kerr, Manager of Journalism Partnerships at Facebook; and Craig Newmark, the founder of craigslist. The latter two are among the nine original funders of the News Integrity Initiative.

De Aguiar has more than 11 years of grant-making experience, including building a program and portfolio of grants from scratch, which helped Dodge become nationally known as an innovator in funding local journalism.

In 2016, she co-authored a report called “Lessons Learned from the Local News Lab: Building a More Connected and Collaborative News Ecosystem.”

She is a board member of Media Impact Funders and a Democracy Fund Fellow.

“We are so pleased we were able to attract someone to this position with the extensive grant-making experience that Molly has, as well as the deep knowledge of journalism and civic engagement,” said Sarah Bartlett, Dean of the CUNY Graduate School of Journalism.

Jarvis, who is on the Dodge Foundation’s board, added: “Having worked with Molly on strengthening New Jersey’s news ecosystem, I have witnessed first-hand her national leadership and innovation in building community engagement. Through NII, I am delighted she will now have an international platform from which to share her perspective and expertise.”

Focus is on cases where attackers intend to destabilize democratic, social, and economic institutions.

The project looks beyond literacy and platforms to how audiences process and view information.

The Engaged Journalism Accelerator is supported by a grant from the J-School's News Integrity Initiative.

Shei will serve as associate director for strategic partnerships to build support for quality journalism.