Students graduate from the Newmark J-School with the reporting, writing, and technical skills media employers want. How does that serve them in the job market?

There are no uniform standards for defining and reporting alumni employment among graduate journalism programs. The Newmark J-School tracks the percentage of alums who are paid to work at least 30 hours a week in journalism one year out, whether they are in staff positions, working as freelancers, fellows, or interns, or are media entrepreneurs. Our job stats do not include alums who are working part-time as journalists or who have jobs with NGOs, branded content companies, or tech start-ups, for instance.

For the class that graduated in December 2017, about 70% were employed full-time in the profession one year later in December 2018. They were working at such media organizations as The New York Times, ProPublica, NowThis, The Los Angeles Times Community Newspapers, NPR, the Philadelphia Inquirer, Vox Media, NBC News, Politico, MLB Advanced Media, and the Fort Worth Star Telegram.

On the Job with… 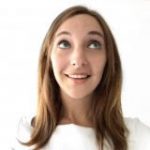 Where are you from? I grew up on Long Island, New York, and I studied English and politics at NYU. Now I live and work in Astoria, Queens. I’ve tried a few times to live in other cities, but New York keeps wooing me back.

What do you do? I’m a staff writer at NerdWallet, the personal finance website. I write primarily for our blog aimed at recent college graduates. My articles give 20-somethings tips on how to manage their money, understand their student loans and search for jobs effectively. NerdWallet is a startup based in San Francisco, so I work remotely from New York. I love learning about the tech scene and emerging journalism business models. I’ve also become an evangelist for Roth IRAs.

How did you get there? I came to CUNY with no journalism experience, and my first Craft class with Tim Harper and Ellen Tumposky was the crash course I needed to whip my writing into shape. From there I tried to get as much newsroom training as I could. In addition to the required summer internship, I interned at WNYC my second semester and at the New York Observer during my third semester. My CUNY background and the real-world experience I picked up during J-School gave me the journalism chops NerdWallet was looking for.

How did the Business & Economics program help? I didn’t expect to study business and economics when I started at CUNY. But Greg David’s pitch — that learning how to tackle complicated subjects would set us up to write about anything — struck a chord with me. As a personal finance reporter I wouldn’t have the confidence to work with numbers or to delve into the complexities of topics like retirement savings without the business and economics concentration.

News organizations that have hired our grads

The Craig Newmark Graduate School of Journalism graduated its first class in December 2007. The school now has more than 1,000 alumni.